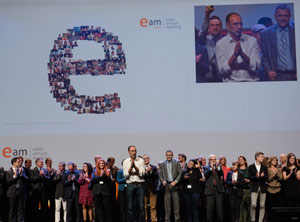 Nowadays, it’s more important than ever to listen to different opinions and seek common ground to move forward. This idea, which the president of the EADA Foundation Board, David Parcerisas, has constantly repeated, took centre stage in the EADA Annual Meeting 2016, the major EADA Alumni event held on 18 November at the Palau de Congressos de Catalunya. The event, which launches the academic year and sees graduates from the previous year receive their degrees, explored the idea of connectivity from three standpoints: the creation of value, engagement and several experiences that can be shared.

The intangible is key

“It’s a time for connecting, engaging and sharing,” Parcerisas said in his keynote speech. He believes that “it is something obvious and, however, becomes an increasingly difficult challenge to attain because we live in a capitalist society that values 'having' over 'being'.” He added, “these days, the most interesting opinions aren’t coming from politicians or the financial sector; instead, from charities, social movements and numerous entrepreneurs that, while unknown to most, add value to society.”

Alexis Mavrommatis, EADA Marketing lecturer, echoed these sentiments, relating the creation of experiences and value with multi-culturalism: “Today, almost a thousand people have gathered, with over 20 nationalities represented and 7 different religions and, despite our cultural differences, we are co-creating, sharing experiences, adding value.”

Alexis referred to Greek philosophers, particularly Aristotle’s Rhetoric to define the concept of value. In his opinion, “value is the sum of aesthetics, i.e. everything tangible, and ethos, the intangible.” He adds that “modern society and, therefore, the business world, only values the tangible, what can be measured. However, good decisions are intangible; they are related to emotions.” He continued by saying that “Volkswagen’s decision to cut 30,000 jobs over five years due to the emissions crisis is a response to a company strategy to lower costs, but under no circumstances is it a good decision because it doesn’t consider the lives of the people affected”.

An example of co-creation 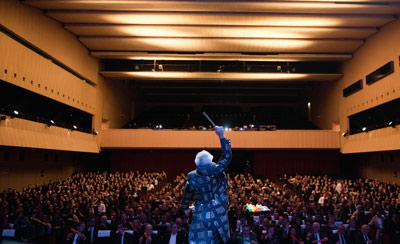 To connect and create value with other people, it’s not a sine qua non condition to know each other. We don’t even need to speak, which for many is the main obstacle for starting a conversation with someone unknown. This was shown by Steve Barnett, the “silent orchestra director”, able to create a melody without speaking, without rehearsing and targeting an unknown audience. Like any orchestra director, Barnett took centre stage. He took out three different coloured tubes, which the attendees had to play, each awaiting their turn. Consequently, together they create music with rhythm and harmony.

At the end, the message Barnett projected on the stage screen read: “In this room, a diverse group of people played together in rhythm and harmony, without speaking, unrehearsed and without musical training. You did it effortlessly and quickly. The same can happen in our lives, within the communities that make our worlds move forward and in organisations with a global impact.”

Other example of co-creation and, more specifically, of generating value that is seen in society, was explained by EADA Alumni Fouad Karam –who studied the International Master in Marketing between 2006 and 2007–. He has worked for some years in the Red Bull Marketing Department as International Culture Marketing Manager. His work involves scouting young international talent and helping new recruits to develop their professional careers. For example, Fouad leads Red Bull BC One project, an annual competition held by Red Bull to select the best B-Boy, the name given to break dancers.

To create value, we must establish connections with different people and understand their culture, history and context 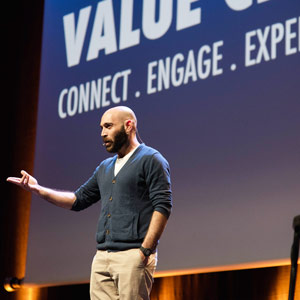 “My work involves creating value to improve society and change people’s lives,” he explained in the EADA Annual Meeting. “However, to create value, we must establish connections with different people and understand their culture, history and context”, he added. This happened with Foad Ambelj, better known as Liz Zoo, a young B-Boy from Morocco who started dancing in 2008. After four years of practising daily, this young man represented Africa in the 2012 Red Bull BC One World Final in Rio de Janeiro. He’s been crowned world champion three times and has now made his dream come true by being part of Flying Steps Entertainment, the most important progressive urban dance group in the world.

“We’ve managed to help a kid from the Moroccan suburbs become a leading figure on the international B-Boy scene,” the EADA Alumni said. He added that, “Red Bull’s main objective is to create unique experiences that add social value, not so much sponsoring an event or showcasing the brand’s logo.” He continued, “all companies have a social commitment, therefore contributing towards creating a better society will increasingly help brands to stand out from others”. 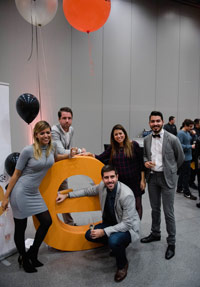 The EADA Annual Meeting ended with a networking session led by another EADA Alumni, Fernando Le Monnier –who studied a Marketing Management programme between 1991 and 1992–, is currently the Director in Spain for Green Hat Challenge, a company leading the way in Europe in interactive solutions for meetings and corporate gamification. The activity involved an interactive game with tablets where all attendees, split among several teams, had to resolve queries related to EADA and the training programmes they studied or are still studying.

The Alumni featured Joad López, who studied the International MBA in 2010 and subsequently founded the successful ice-cream shop chain Eyescream & Friends. “For me, it’s been a chance to meet up again with my Master course mates I hadn’t seen for years, and to go over some of the ideas we looked at in class.” Similarly, José Marcet, currently studying the same programme as Joad, highlighted “the chance to exchange impressions with other students who’ve finished the Master and to interact with students from other programmes.” Lastly, Íñigo Bonilla and Francesco De Santis, both currently studying the International Master in Tourism & Hospitality Management, emphasised “the importance of networking not only to establish new professional contacts, but also to build partnerships between companies to be more competitive in the current global environment.”

General management and leadership
EADA's International Master in Tourism and Hospitality Management at position 17th worldwide and as the 1st of Spain. 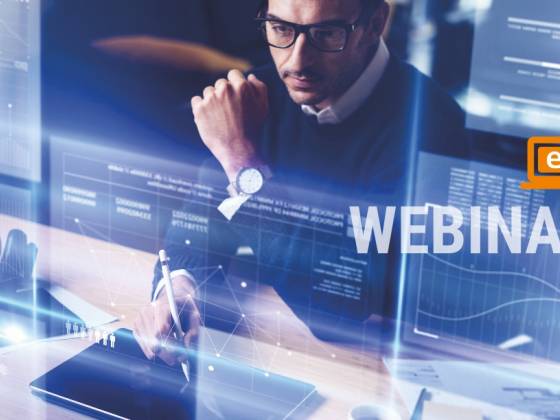 General management and leadership
EADA is launching a series of free webinars on current issues related to Covid-19 starting March 31st. These will be the EADA Growth Talks. 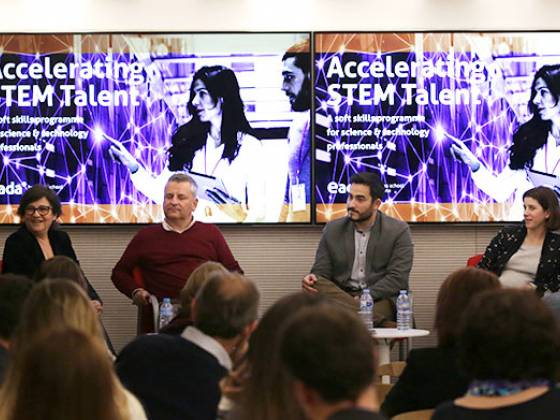 Companies are looking for STEM profiles with management skills

General management and leadership
During the debate on "Enterprises and STEM" at EADA, it was highlighted the lack of female STEM talent and the STEM profiles with soft skills.