EADA Business School expands its network of academic partners committed to social innovation. The latest agreement signed was on November 23th with the Ashoka Foundation, the world's leading community that brings together more than 4,000 social entrepreneurs in 90 countries. Its mission is to create and promote a global network of changemakers, that is, leaders of social change, to multiply their influence and impact.

The objective of this partnership is to promote pedagogical knowledge on social innovation through the development of joint projects. According to Jordi Díaz, Dean of EADA, "both institutions share the same commitment to driving social innovation and solving social challenges through changemakers who inspire other people and change the world." In signing the agreement, Díaz emphasized the international recognition that EADA has achieved in 2020 by ranking among the 9 best business schools best valued for their positive impact on society, according to the Positive Impact Rating - a new global evaluation conducted by the Positive Rating Association–. "A rating that is based solely on the evaluation of the students and that confirms the curricular and extracurricular experiences that all of them have in relation to social and environmental issues and in a multicultural environment", he pointed out.

Along the same lines, Alexandra Mitjans, Director of Ashoka Spain, who states that her organization "identifies, connects and accompanies innovative and entrepreneurial people with the ability to bring great ideas to reality". He added: “They are changemakers who go out of their comfort zone to generate disruptive ideas. Their success depends on their ability to motivate the people around them to be participants in solutions that improve the world ”.

Amaia Elizalde, Director of Alumni and Fundraising at EADA, believes that "academic institutions and social enterprises must move in the same direction and find joint solutions to problems that have worsened as a result of  Covid 19." In her opinion, "future leaders must have this mindset, therefore, we instill it in all our programmes and reinforce it through agreements with socially committed entities." As a result of this collaboration, the current participants of the EADA Master in Sustainable Business & Innovation will carry out their final projects based on seven social projects promoted by seven Ashoka entrepreneurs, the Ashoka Fellows. Specifically, they will have to analyze the scalability of the social / environmental impact and make a mapping of the stakeholders of companies that address challenges such as economic development, education, employment, the environment, citizen participation, health or technology. "For all of them it will be a unique opportunity to act as changemakers, learn from organizations that are changing the world, be inspired and inspire their environment," says Federica Massa-Saluzzo, director of the master programme.

The seven social projects that the participants will work on from January to June are:

CiaoLapo: An Association that offers psychological support to parents and relatives who have lost a baby during pregnancy or after delivery. It has health professionals who not only give advice to these people but also give useful information about perinatal health.

Fundación Ana Bella: The project promoted a few years ago by Ana Bella Estévez has served to transform the stigma that affects women who are  victims of gender violence grow towards a perception of strength and improvement. It encourages women survivors of violence as agents of change in society.

Tice Live and Learn: An Initiative promoted by a team of psychologists who offer services for families, adolescents and children. They give advice to young people at risk of exclusion. They give them guidance on issues related to the development of psychopathologies, school dropouts, social isolation or cyberbullying. Fundación Pau Costa: Its founder, Oriol Vilalta, is changing the paradigm in the fight against forest fires through a management system that is based on prevention rather than extinction. It has managed to mobilize an international network of researchers, forestry agents and citizens.

Por Causa: Gonzalo Fanjul, who leads this project, is providing the public with complete and truthful information about the people whose voices are not heard, mainly in the immigration field, through a unique model of influence over the media and politicians.

Fundación Cuidados Dignos: An iInitiative that has transformed the care system for elderly and dependent people in Spain, placing their dignity and quality of life at the same level as the care of their physical ailments.

Trànsit: An organization that has revolutionized the healthcare model for transgender people due to its conception of “trans” as something natural and not pathological. The Online Master in Exponential Organisations at EADA Business School reached the final of last month’s ExO Awards. This is the main international event of the ExO community which brings together... General management and leadership
EADA has renewed its EQUIS accreditation for another five years. Awarded by EFMD Global, it is considered the accreditation with the highest international prestige in the field of executive education. 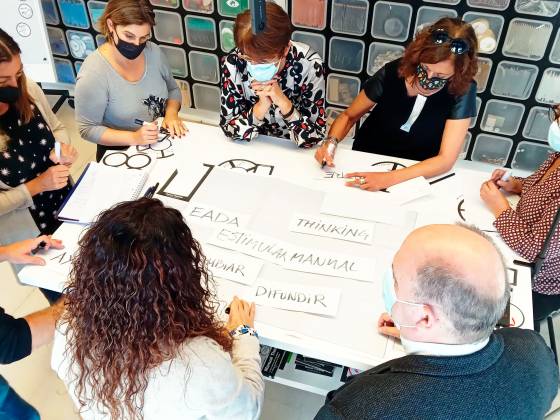