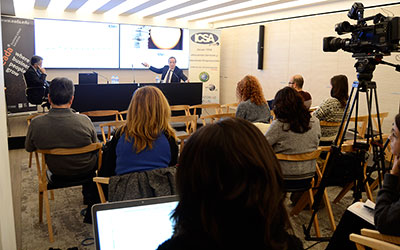 Despite the recent economic recovery and more than a 3% rise in GDP, wage stagnation in Spain remains. This was revealed in the 12th Wage Growth Report 2007-2018 compiled by EADA and ICSA Group (an HR consultancy group with a wide experience in management recruitment) using salary data from more than 80,000 employed workers in Spain.

These salary increases have been consistent over the last few years. From 2007-2018, top and middle-level managers have managed to maintain their level of purchasing power by registering a positive differential of 1.18% and 2.46% respectively with accumulated inflation of 16.8%. However, during this same period workers have lost 0.3% of their purchasing power.

President of the ICSA Group, Ernesto Poveda, acknowledges that “the increases in 2018 have been less significant than expected.” He adds that “the 22% increase in the national minimum wage, which was a policy recently approved by the Government, will only affect 4% of the population and therefore will have a minimum impact.”

According to Jordi Costa, author of the study and director of the EADA Postgraduate course in  Strategic Labour Relations and Compensation, the Programme in Strategic Labour Relations and the Programme in Integral Compensation affirms that “companies have neither redistributed profits to workers nor investigated new models of flexible pay in areas such as work-life balance, flexible working hours, training, meal vouchers or childcare.” He adds that the “policy of everyone in the same role or specific area receiving the same salary is a mistake. Companies should review the salaries of each worker based on what they contribute to company productivity.”

Both Poveda and Costa agree that the policies of “austerity” and “containment” that companies still adhere to made sense in the years following the 2007 crisis but not in recent years when there has been “clear evidence of economic recovery”. However, Costa is keen to admit that “small business owners are making more of an effort to improve workers’ pay compared to larger companies where there still exists a big wage gap between top-level managers and workers. 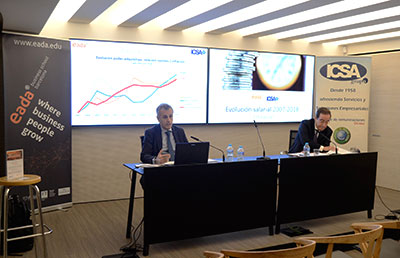 Despite the restructuring of the financial sector in the years following the crisis and the subsequent loss of 80,000 jobs, workers are still the highest paid of all the professional categories. In industry, internationalisation and exports have maintained salary levels. The crisis in the construction industry and the massive loss of jobs continues to affect salary levels which have not yet recovered.

At the opposite end of the scale, however, is the commerce and tourism sector or “the low-cost sector of salary incomes in Spain”. According to Poveda, “it is surprising that this thriving sector which represents such an important part of our GDP continues to pay such low salaries to its workers.”

Top-level managers, on the other hand, receive the highest salaries in Madrid. They are paid 85,347 euros a year which is 5.3% higher than the national average. Catalonia is in second place with salaries of 82,310 euros. Middle-level managers in Catalonia are paid 42,148 euros on average whereas workers receive an average salary of 23,171 euros.