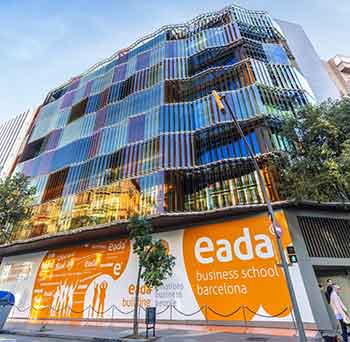 EADA starts a new chapter in its exciting history that began in 1957 thanks to two entrepreneurs: Irene Vázquez and Arturo Alsina. Three years after the complete renovation of its headquarters, the new EADA campus, the Barcelona City Center Campus, has been officially opened. Its avant-garde architecture, with a polychrome and meandering glass facade, its diaphanous and luminous interior space and its commitment to sustainability and energy saving, make it a new landmark of the city of Barcelona.

The media, political authorities, CEOs and Alumni discussed the inauguration of the campus together with the members of the Board and the steering committee. According to Miquel Espinosa, general director of EADA, "the different shades of the EADA facade reflect the growing cultural diversity in the classrooms." Specifically, more than 90% of Full-Time programmes participants come from abroad, mostly from Europe and Latin America –around 22% come from North America and Asia– Middle East. Espinosa was influential in the initiation to rehabilitate the building, guaranteeing its integration in the historic center of Barcelona, “reflecting on its facade the characteristic architecture of the Eixample.”

Board of Trustees Renewal

The renovated campus also symbolizes the next stage for EADA with a new Board of Trustees. In the last six months, five new members have been incorporated, including the CEO of Mobile World Capital Barcelona, Carles Grau, the president of China Club Spain, Margaret Chen and the professor of the Pompeu Fabra University of Barcelona, Guillem López Casasnovas. 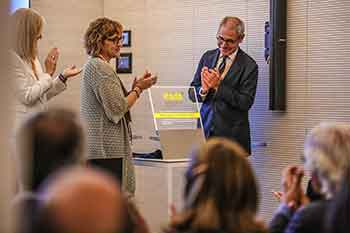 Jordi Pursals takes over as President of the Board of Trustees of EADA Foundation. President of EDV Packaging, he replaces David Parcerisas. In his institutional speech, Pursals was excited about the new stage ahead of EADA. He highlighted the international recognition of the business school –among the 30 best in Europe and 50 in the world according to the Financial Times– and obtaining the most prestigious international accreditations –EQUIS and AMBA. For Pursals, “the fact that EADA is part of the cluster of business schools in Barcelona, one of the most important in the world only comparable to Paris, London or Boston, added to the more than 50 academic alliances established with institutions of the 5 continents, give it an excellent international projection.”

Among the main challenges for the future, Jordi Pursals hopes “to attract more participants from the Asian and North American market, because in Europe and Latin America we are very well positioned, and we are committed to online training, further enhancing the virtual campus.”

Among the institutional speeches, Matilde Vilarroya, General Director of Industry of the Generalitat de Catalunya, pointed out that “EADA was the first business school in Barcelona”. Vilarroya focused on the values ​​that the business school represents: "Innovation, independence, business talent, academic excellence, and global vision". She thanked the institution for its contribution to the growth of organizations and, at the same time, of the country.”

In the same way, Montserrat Ballarín, governor of Commerce, Markets and Internal Regime and Finance of the City Council of Barcelona, ​​said that “the triumph of EADA is a triumph for the city of Barcelona, ​​because during these decades EADA has attracted international talent, it has generated quality employment opportunities and has managed to spread the Barcelona brand worldwide."

We also had the presence of Aurea Benito, a graduate of the Master in Human Resources Management of EADA and, currently, Corporate HR Director at ISDIN. From his experience during the master, she highlighted her personal and professional transformation, “which allowed me to face any challenge and aspire to any dream.” 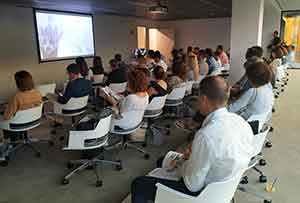 The motto of the opening ceremony of the EADA campus was Building Emotions. After photos in the huge photocall on entering, the attendees toured the different EADA floors converted into an exhibition with the most significant milestones in the history of EADA, in a movie theater where EADA's advertising videos were projected, in a disco with more videos and with the famous EADA E to take pictures. It was an opportunity for Alumni from different promotions to meet again and to speak to representatives of companies and institutions, as well as with the professors, steering committee and members of the EADA Board.