EADA Business School took first place in the final of the CFA Institute Research Challenge 2019 held at the Madrid Stock Market on February 28. The Challenge is one of the most important competitions of financial analysis for leading business schools in the world, managed by the CFA Society Spain. After several successive years of qualifying in the top three, this year EADA was awarded first place. The winning team is made up of five participants from the International Master in Finance: Frederik Hünnekens (Germany), Jón Haukur Jónsson (Iceland), Jiawen Liu (China), Iryna Krepchuk (Belarus) and Adarsh Motwani (India). A second EADA team reached the final in Madrid, including participants from both the International Master in Accounting & Financial Management and International Master in Finance. Although the second team did not take home the prize, they were pleased to be selected to compete among the seven finalists in Madrid.

All of the teams who made it to the Spanish final were required to complete a comprehensive financial analysis and valuation of the company Sacyr, a giant in the construction, real estate and infrastructure industries. According to Joan Tarradellas, EADA professor and CFA team tutor, “This has been one of the most challenging appraisal exercises I have seen in my career, especially because Sacyr operates so many companies in such diverse markets.”

The preparation of the project 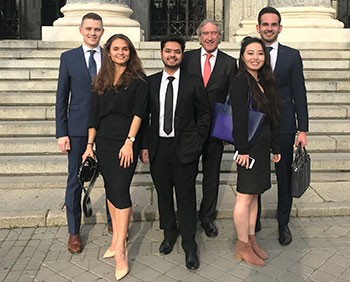 The teams had three months to prepare the report that was presented in Madrid, where they had to put into practice everything they learned in class. Students highlighted the following challenges of the competition: collecting data about a complex company such as Sacyr under time constraints, identifying synergies in a group of diverse team members, overcoming the fear of presenting to a panel of experts and presenting the findings effectively. "Right away we learned how to take advantage of our different backgrounds, because when preparing the final project, each one specialised in the plot that dominated", explains Adarsh Motwani. For this, as Jiawen Liu points out, "it has taken a lot of communication in the team, a lot of trust and honesty and a lot of critical sense with others."

For Jón Haukur Jónsson, "one of the greatest difficulties has been balancing the pressure of the exams with the preparation of the project for Sacyr". According to Iryna Krepchuk, "as we were approaching the date of the presentation we did not have time just to rest or to see family and friends, we were only focused on the exams and the project". To this, she adds the amount of information they had to analyse: "There came a time when we did not know whether to analyse more data or to stop investigating."

“The presentation before the jury was another great challenge, because we had to answer many technical questions, some details that we did not know and always being convincing in our arguments", says Jiawen. The key to their victory, according to Frederik Hünnekens, was "our security, our competitive sense and the mix of profiles with different backgrounds." 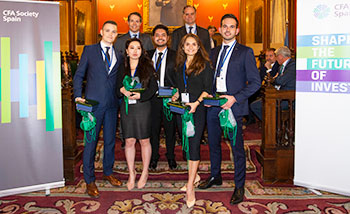 To Jaume Bonet, EADA’s Master in Finance director, the team's victory in the CFA Research Challenge is mainly due to four factors: "Their great motivation, their excellent technical preparation –especially in the written report–, the practice of the soft skills learned in Collbató campus and their sense of team, also of the other finalist EADA team members". In his opinion, "both teams, just for the fact of being selected in this important competition, have passed through a unique experience that gives them unparalleled learning and great international recognition that will open them many doors."

EADA professor and CFA team tutor David Gonzalvo agrees. “The CFA Research Challenge is a unique opportunity to get an idea of how a real company financial analysis and valuation work,” he says. “Although it is technically an ‘academic’ competition, the idea is that the final report is very similar to the work of a real financial analyst.”

But the race of EADA’s winning team does not end here. Now that the team has been recognised as the best in Spain, team members will compete in the EMEA regional final in Zurich (Switzerland) on April 10-11. The team that wins the regional final travels to New York on April 25 to compete in the global final. "I fully trust them, I think they are prepared to win again", assures Bonet.