The impact of economic recovery on the increase in salaries 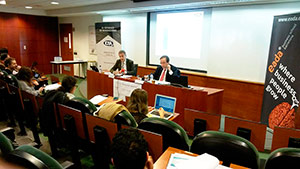 The ICSA Group and EADA 2007- 2016 salary progress report confirms the recovery of the Spanish economy in the recent financial periods. According to the study, for the first time during the financial crisis, salaries in all professional categories increase.

According to Jordi Costa, Professor of Labour Relations, Negotiation and Salary and Benefits Policy at EADA, "this salary increase is due to the GDP recovery, which after dropping by 9.2% between 2009 and 2013, when the financial crisis reached its highest point, between 2014 and 2016, has grown by 7.8%". Of all categories, Costa highlights the improved salaries of middle management: "During the financial crisis, they were no longer a key component in organisations. As a matter of fact, many were made redundant and replaced by employees that took over their role with a lower salary. This is due not only to the adverse economic situation, but also to the progressive elimination of hierarchies within companies, which has meant that any member of staff may take on new roles and responsibilities". 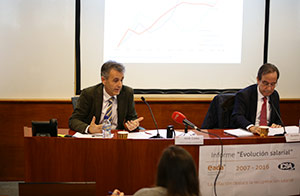 By sectors, the best paid professionals are in the financial sector (banks and insurance). "After the restructuring of recent years, the banking sector has been able to recover and salaries have increased again", ensures Costa. Specifically, in this sector, the average salary of directors is €85,835, of middle managers €44,265, and basic employees €25,820.

The other best paid sector is the industry sector. Various factors have influenced in this case, such as increased qualification of professional profiles, commitment to internationalization and exports, and the repatriation of business activities. In relation to this final point, the EADA professor ensures that "an important trend has changed, as up to relatively recently, businesses externalized their production to third-party countries such as China or Morocco, where production costs were lower". Now, on the contrary, "the same companies have brought these activities back to our country, placing value on the quality of their products".

The best paid professionals are in the financial sector. On the contrary,  the worst paid are the commerce and tourism professionals

On the other side of the spectrum we have the commerce and tourism sectors, which are the worst paid of all categories. Costa believes that, "despite these being important sectors that push the economy along in our country, they are still very poorly paid, above all because they continue to be jobs for people with few qualifications". In this case, from 2014 to 2016, a salary increase has only been recorded for middle managers, rising from €30,000 to €34,609, and for basic employees from €17,000 to €18,122. Alternatively, in the same period, directors' earning power has dropped from €76,000 to €72,702.

Moving towards a sustainable salary model

Ernesto Poveda, chairman of the ICSA Group, ensures us that "in the current context of the economic recovery, with these salary increases and the considerable drop in unemployment numbers - 4,237,800 at the end of 2016 - it is the ideal time to reform our salary systems". In his opinion, "businesses should replace fixed salary models for other variable models which favor the personal and professional development of staff". He explains that there are many formulas, amongst which, "the flexible work timetable for conciliation, training, a healthy work atmosphere, and reaching objectives based on projects where staff is able to grow".

The question is, why is now the time, when these sustainable salary formulas have always existed? According to Poveda, "because currently one of the main challenges for companies is to retain their talent as on many occasions the profiles they look for are not willing to switch jobs". He adds: "Salary is not at the top of the list of priorities when considering a change, they will consider personal and professional conditions much more, which they will request from the company concerned"