EADA participates in the first edition of Imagine IoT 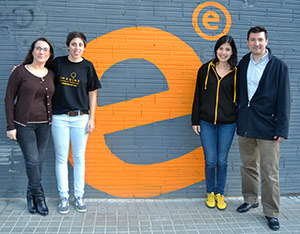 Four EADA students have explored the possibilities that the Internet of Things offers to change the world and tackle social issues. They have done so in the first edition of Imagine IoT, an initiative promoted by the Imagine Creativity Centre, whose motto is to change the world through disruptive innovations and multidisciplinary teams, formed by young people united by their passion for innovation and creativity. In this challenge, four organizations have posted four social challenges to 20 young talents.

On this occasion, students at EADA have had the opportunity to participate in each of the four proposed projects. They have done so as business developers, working hard for four months with four other members with different profiles to theirs –creatives, designers and technology developers. In total, they have dedicated 180 hours to the task– including mentoring by way of entrepreneurs, workshops and masterclasses, which have not only been carried out on the EADA campus but also in Elisava, UPC and Eurecat.

One of the projects is one proposed by Autopistas, a company owned by the Abertis group. It posed to participants the challenge of developing a technology that would guarantee and maximize road safety for motorway users, as although only 1% of all accidents occur on the roadside, these accidents cause, in fact, 1% of all fatalities. Among the participants was Clara Remacha, an International Master in Management participant from 2014 to 2015 and an Imagine Express dreamer in 2015.

The solution they developed was SafeBeat, a device that initiates three actions when pressed by the person in question at the roadside. Firstly, it sends the car's location data to the motorway monitoring centre to send assistance. Secondly, it gives the user precise voice instructions to maximize their safety. In addition, it enables other drivers on the motorway to be warned that an incident has taken place so that they reduce their speed. The device also included cascade-style signaling sticks to reinforce light signaling –beyond the typical triangle and the safety vest.

"It's a project with a lot of potentials and a prospectively very speedy time to market", says Remacha. She added: "This experience has helped me to understand the impact that IoT can have on any business, because we're talking about a new concept of efficiency. In this way, efficiency will be produced in that everything will be connected, machines will be able to talk and learn from each other and generate such an amount of data that more accurate predictions will be made than currently are”. Clara quotes Jeff Immelt, CEO of General Electric, who has already announced that companies will become increasingly aware that the future's value is in data. " For Clara, "IoT will be the vehicle to obtain this data”. 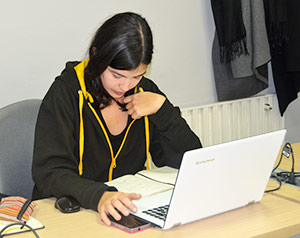 The second project is Adan Medical Innovation, a biotech startup committed to improving the lives of individuals and families facing the prospect of possible anaphylaxis, a serious allergic reaction that affects the whole body and can be fatal. Following the success of AnAPPhylaxis, the medical device launched at Imagine Silicon Valley 2014, in this edition of Imagine IoT Adan MI posed a life-saving challenge: how to help a person suddenly struck by this allergic reaction in a public place?

Carmen Delgado, International MBA –Part Time at EADA between 2009 and 2010, was a participant. "We have developed an adrenaline solution within reach of anyone suffering a case of anaphylaxis," she explains. In her opinion, "The most critical time was the prototyping phase, a moment in which the expertise of each member of the team was truly valued." As she says, "It was essential to be well coordinated but, at the same time, to be able to move forward in our task".

In Imagine IoT there are no winners nor losers, all projects are equally important

For the EADA Alumni, "It was a very fun and entertaining experience, especially in technical areas that I did not know about previously and in the application of the Lombard method". In her opinion, "In Imagine IoT there are no winners nor losers, all projects are equally important and we must all offer the best solution to the social need the sponsors are focused on".

For its part, Grupo Cosentino proposed to Imagine IoT dreamers to design and develop its worktop of the future, the Silestone 2030. "We spent many hours discussing ideas and possibilities, researching and prioritizing, until we defined the problem we wanted to focus on," says Sindy Petoia, International MBA at EADA from 2010-11. She explains, "We concluded that the current technological environment has changed users' needs, as, accustomed to immediacy and efficiency, they are increasingly disinterested in craft processes, including everything related to the world of cooking". Therefore, she continues, "Knowing advances in augmented reality, we thought that we could integrate them in the Silestone future worktop, because it would turn the practice of cooking into something easy and fun." In her opinion, "The smart countertop is a real, feasible prototype that could shore up the kitchen tradition and facilitate other types of processes related to learning, entertainment and health".

More and more intelligent objects are being launched on the market, and there is more data to measure, transfer and store

After her visit to Imagine IoT, Sindy is very clear on her desire to dedicate herself to this area. Firstly, "Because the Internet is increasingly integrated into our lives because more and smarter objects are being launched onto the market". As she says, "Beyond computers, mobiles, television or wearables, any object can be adapted to measure data that can be transferred and stored later, generating valuable information for anybody". On the other hand, "In the short term, the IoT will enable apparently unrelated sectors to connect together, so the potential there is immense”. 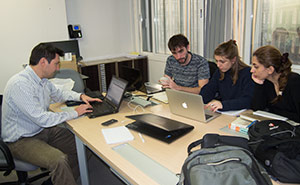 Finally, Dormity.com, a company specializing in the manufacture and distribution of mattresses and rest systems, has called on dreamers to design a smart mattress that connects with peoples' rest. Specifically, they proposed a technology that collects information from people while they sleep to contribute to improving sleep quality and, thus, to improving their quality of life.

Part of this project has been Eduardo Pardo, enrolled from 2011 to 2012 in EADA's Sales and Business Management Programme. As he says, "We developed sensors in the mattress that can also be used in the bedroom to collect data on humidity, temperature and respiration”. And he adds: "By being able to keep track of peoples' rest we saw that we could orient the sale of the product instead towards a sale of a service offering rest. In addition, we consider the possibility that users could share information on social networks related to their rest, thus creating healthier habits".

For Eduardo, "This project symbolizes the change in business models that the IoT makes possible, as companies will have even more information about their client and their context, which will surely bring on higher rates in customer loyalty". For him, "One of the biggest opportunities will be found in augmented reality since it can replace the screens of our Smart devices".