EADA has taken a decisive step towards boosting talent among young female students and researchers from African countries. As a result of the collaboration agreement with the Women for Africa Foundation, EADA has expanded its scholarship programme for these women so that they can complement their university training in Spain and invest their acquired knowledge into improving their communities, transforming their environment and contributing to their country’s development.

Both Jordi Pursals, President of the Board of Trustees of the EADA Foundation and EADA Dean Miquel Espinosa, agree on the need to “offer opportunities to female students from Africa via this sharing and transfer of knowledge”. President, María Teresa Fernández de la Vega, who set up the Fundación in 2012 to promote development in the continent by supporting African women, believes that “both institutions share the same commitment to equality and development”. According to De la Vega “knowledge is fundamental because it forms the basis of all development”. She adds that, “these women have different profiles but they all have an incredible potential to transform their environment. It is this knowledge sharing which is beneficial to both sides.”

Two women receive scholarships for the EADA Master in Management

A 25-year-old Nigerian woman called Oluwadamilola (Dammy) Lawal was present at the signing of the collaboration agreement. She was the first woman to receive this scholarship, which is awarded by EADA and the Women for Africa Foundation, but which also receives donations from Alumni, companies and professors. Dammy is a researcher trained in technology and computing and was a participant on the EADA International Master in Management last year. She graduated with a BSc (Hons) in Information and Communication Science from the University of IIorin in Nigeria. 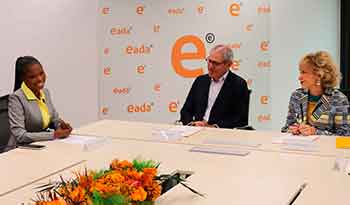 Dammy was very grateful for the opportunity to study a master’s at EADA. She highly values the multiculturalism of the classes and the acquirement of skills which will enable her to lead different projects. According to Dammy, “the education of girls and women is the key to tackling poverty in Nigeria” and she focuses on the idea of “female pioneers promoting technology in Africa through policies which encourage science, development and innovation”.

Christelle Civanvunya is another candidate who has been selected to join Dammy on the Master in Management. Originally from the Congo, she is passionate about the world of science and technology and a real social entrepreneur who is committed to her country’s development. Christelle has taken part in different programmes and networks such as, Young African Leaders Initiative, which was founded by its President, Barak Obama. She has also created her own start-up company in agroindustry.